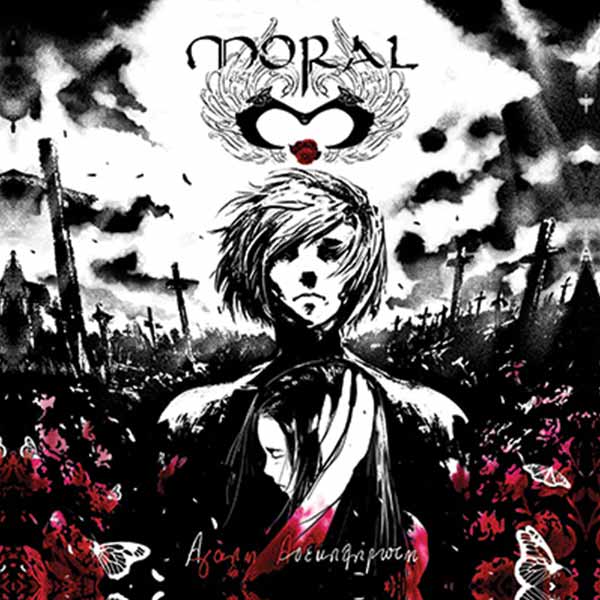 »Hey, can you write me a song?« This question of my cousin Thomas back in (I think) 2003 started it all. The good feedback to that first song »Σ’αγαπω« (S’Agapo – I love you) encouraged us to write some more music. Eventually we had 15 tracks, enough to easily release two records. But Thomas’ idea was to make a concept album – the old story of unfulfilled love (which is the meaning of the title »Αγαπη Ανεκπληρωτη«) told through poetic lyrics and emotional music.

The production of this album was quite a long process. My way of writing music, which is basically recording the tracks while writing, was particularly beneficial in this case, because I was able to send Thomas, who lives in Athens, Greece, almost finished music tracks. He then wrote the lyrics and vocal melodies, which he recorded in Athens, and Niko, guitarist and the first other member of the newly founded band Moral, added his solo guitar tracks to my recordings.

We thought it was a good idea to have someone else mix the songs. So we had a few engineers give it a go – and weren’t happy with the results at all. Finally we went back to my demo mixes and I worked from there. Basically, at least 80 % of what you hear on this record are still my demo tracks – some of them even first takes.

After finishing the mixing we had it mastered at Galaxy Studios in Belgium. Thomas wanted it mastered by Darcy Proper, who has worked for Johnny Cash, AC/DC, Manowar, Porcupine Tree, Toto and many more. Due to a scheduling problem, she hasn’t been able to do the work, so Ronald Prent (Rammstein, Guano Apes, Queensryche, Freddy Mercury, Iron Maiden etc.) did the mastering. Although he did a great job, we haven’t been informed about the rearrangement and Thomas insisted on having the album mastered by Darcy Proper. So she mastered it again.

Having a finished product, Thomas began looking for a record company to distribute the album. After many months and talking with different companys Universal Music Greece agreed to release »Αγαπη Ανεκπληρωτη«. But we had to make a few changes to the mix. So I went back to the studio and worked on the songs again. The new mixes have been mastered by Ted Jensen (Metallica, Nickelback, David Bowie, Kings of Leon, Green Day, Stone Sour and many many more) at Sterling Sound in New York City.

To also tell the story of the album visually Thomas hired the manga artist Dan Kim to do the cover artwork and illustrations for the booklet.


AVA Studios in Nuremberg produced the music video for the single »Σαν Πεταλούδα Χάσου«. The visual style is the same as the manga artwork by Dan Kim.